Creepy Christian Cinema DVD. Churches have been using film to spread their message since the early 20th century. Of the thousands of films made for churches and synagogues, the AV Geeks have picked some of the strangest and creepiest… Films include: He Restoreth My Soul, Youth Suicide Fantasy: Does Their Music Make Them Do It? and Stalked. 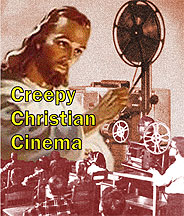