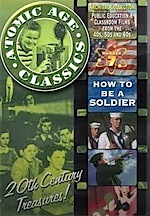 Atomic Age Classics, Vol 7: How To Be A Soldier DVD. During World War II, 16mm educational films were recognized by the U.S. Military as an efficient and effective training tool to get a consistent message across to a large number of troops. The films and projectors were portable and inexpensive. The challenge was to come up with effective means to engage the average soldier and go beyond the traditional boring lecture to the troops. The films on this A/V Geeks Archive DVD compilation are excellent examples how using short narratives, like-able characters, Hollywood stars, humor, animation and shocking imagery helped to get the soldier’s attention. Some of the films on this compilation were made during World War II and some after – including one made for troops fighting in Vietnam. Military Life and You (1952): This film, part of the “Are You Ready for Service?” series, was aimed at high school boys on the verge of being drafted. It told them what to expect in when in the military and the importance of discipline. Starting Now (1951): “Is it true that they really shoot at you in Basic Training?” Facing the draft upon graduation, three high school boys ponder how to prepare for all aspects of life in the military. Pick-Up (1944): One of many venereal disease scare films made by the U.S. Army Signal Corps. On a furlough, Johnny Green meets a pretty girl Anne, gets the clap, and learns some harsh life lessons about messing around with girls. Private SNAFU – The Home Front (1943), Booby Traps (1944): Two instructional shorts made for the Army Signal Corps by members of the Leon Schlesinger’s animation team. These films help build morale by providing important information in an entertaining format. SNAFU is named after the military acronym “Situation Normal… All F’d Up.” Safeguarding Military Information (1942): “Thoughtlessness Breeds Sabotage!” This propaganda film made by Hollywood professionals stars Walter Huston (The Maltese Falcon) and Eddie Bracken stresses the importance of keeping military information away from enemy hands. Vietnam Training Report – 11: Stay Alert, Stay Alive (1967): This film documents the training program for soldiers sent to fight in Vietnam. It was created to acclimatize troops to the harsh climate, the dangers of enemy booby traps, survival techniques (including chewing the head off of a chicken!), and effective camouflage. 90 Day Wondering (1956): Directed by seasoned Warner Bros. animator Chuck Jones and featuring the voice of Mel Blanc, Young soldier Ralph Phillips re-enters the civilian world and ponders reenlisting. Two spritely characters, Pete and Re-Pete, try to sway his decision.